Pork Chops with Apple and Potato in a Parcel

Another winter dish which does little manipulation of tastes and therefore is vastly improved by good, ideally rare breed, pork. The aroma when we opened the parcels was very porky, perhaps too robust for those used to the wet white stuff that masquerades as pork in some supermarkets. Nevertheless the tastes are quite light and call for a fruity wine rather than a heavy or tannic one. In fact I am increasingly convinced that pork doesn’t like tannin. 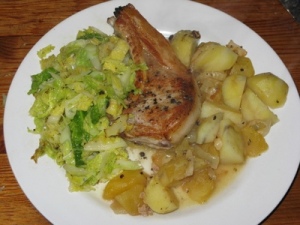 had I had an appropriate one. This needs a fairly rustic Beaujolais, a villages wine, or a cru like Chenas.  Lacking one of them I turned to our old standby Cotes du Rhone, Celliers des Dauphins made in vast quantities, but consistently, from Grenache and Syrah. It manages to be fruity and have enough acidity for a dish like this. It did exactly what was needed.

Though we did have an unusual problem. Never in the scores of bottles of this wine that we have drunk over the years have we had one that was corked – until now. We had to fetch another bottle which proved to be fine. Given the volume in which they produce wine it is strange that  they stick to natural cork when the much pricier white Burgundy that we sipped before the meal came with a plastic one.